Institute for Bioengineering of Catalonia (IBEC)

The Institute for Bioengineering of Catalonia (IBEC) is a research institute covering most bioengineering fields, from basic research to medical applications, aiming to act as an international reference in this field. IBEC was established in 2005 by the Government of Catalonia, the University of Barcelona (UB) and the Technical University of Catalonia (UPC) and was awarded in 2015 with the prestigious Severo Ochoa Excellence Award by the Spanish Ministry of Economy and Competitiveness. IBEC is located at the Barcelona Science Park (PCB) and hosts around 200 researchers and technicians, which are part of its own staff or are associated to the UB and UPC. 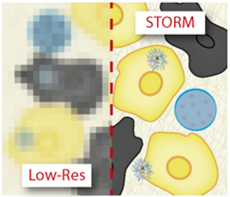 Within IBEC, the Nanoscopy for nanomedicine group  led by Dr. Lorenzo Albertazzi is an international group currently focused on the application of Super Resolution Microscopy to visualize and track self-assembled nanomaterials with therapeutic potential in living cells and tissues.